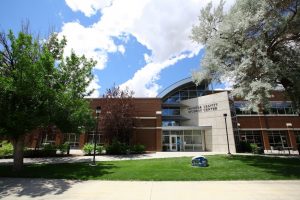 Utah State University’s Price campus went through a makeover this summer, with the Jennifer Leavitt Student Center seeing the most change.
USU’s student body president Alex Anderson is focusing on a more student-centric vision, along with input from peers, that are reflected in the series of adjustments made in the student center. The first shift is the transfer of the One-Stop Student Services space from the JLSC to the Workforce Development building, which will be renamed the One-Stop Student Services Building. Citing the request from students for a dedicated hangout, Vice Chancellor of Student Affairs and Enrollment Services, Greg Dart, discussed the plan that was put into motion.
“Although across campus, and in the JLSC, spaces were dedicated to student life, a desire for those spaces to be consolidated had been expressed, Dart said. “By moving the One Stop to a new building, a new student space called Nexus was developed.” The One-Stop Building concept proved beneficial because of the lack of privacy the academic advisors had in the JLSC One-Stop room. Its spaces were cubicles not conventional offices. “Each advisor now his/her own office [in their new building].”
The Nexus, which means “connection” in Latin, will be a hub for student activity and interaction. Whereas in the past, the various hangout spots were broken up and hardly used, the Nexus creates a centralized location where students can unwind and have fun.
In addition to housing gaming tables, electronic gaming and other recreation, groups such as the Center for Diversity and Inclusion, the Queer Resource Center and other clubs are included in the room.
Anderson believes that this change will bring students more pride in the school, and referenced a trip she went on last year for student government to scout out student centers at other colleges. “Everybody’s colors were everywhere. At Weber [State University] was purple, at UVU [Utah Valley University] it was green,” she said. “I hate that when we walk into the student center our colors aren’t everywhere. I want students to have pride in our building, our space.”
In an effort to do this, Anderson had the Nexus painted with the school’s colors and will hang up a large logo inside as well. If she had it her way she’d put up Eagle logos throughout the student center, but that is still in the works.
“If we instill pride in our school this will become [the] student’s second home,” she said. Another change that has been made to attract more attention is the extension of the hours of operation to 10 p.m. Anderson believes that this will allow students to be comfortable and not feel shooed away had the original 5 p.m. closing still existed.
Other departments in the student center will also be moved, with recruitment, housing, the marketing office and Dart as well occupying the space where the Campus Store was. Aside from the student center new allied health programs, that will launch in Spring 2019, are taking up the former computer lab.
Finally, the BDAC added a smoothie machine and a café. Being that the school year is only a couple weeks in, there are likely to be more changes in the near future.

First time ever for Eastern volleyball team: Women head to nationals this week